Home » science » Read about a type of caterpillar that can ingest plastic bags. 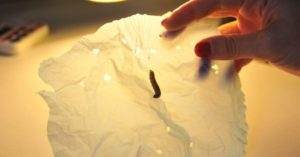 A wiggly, ravenous caterpillar  — one that doesn’t limit its diet to naturally grown objects — can biodegrade plastic bags, a material infamous for the amount of time it takes to decompose, a new study finds.

Now, through a serendipitous discovery, it’s clear that G. mellonella can also decompose polyethylene, a thin but tough plastic that is used across various industries, including in shopping bags and food packaging.