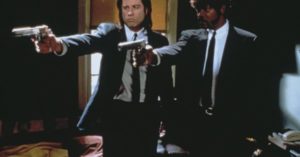 Film trivia is vital to breaking awkward silences and enlivening the dullest of evenings everywhere, so prepare to dazzle your friends with these 51 trivia facts you might not know.

1. Die Hard originated from the failed script of Commando 2.

2. Samuel L. Jackson demanded that the studio keep Snakes on a Plane as the title because it was the only reason he accepted the role.

3. Rather than use CGI, Tim Burton had 40 squirrels trained to crack nuts for Charlie & The Chocolate Factory.

4. Due to a zipper breaking, Olivia Newton-John had to be sewn into the trousers she wears in the last carnival scene of Grease.