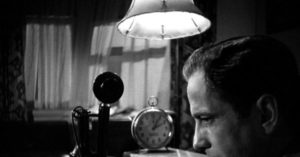 Film noir is a peculiar genre. A Western is identifiable by people on horseback in the West; a musical involves singing and dancing; a war movie shows war. Even the so-called women’s picture was a movie that featured women prominently. But the directors who worked in film noir didn’t use that term to describe their work. One searches in vain for the term in the interviews with some of the genre’s crucial creators—Otto Preminger, Don Siegel, Fritz Lang, Robert Aldrich, and Edgar G. Ulmer—by Peter Bogdanovich in his great collection “Who the Devil Made It.” The first appearance of the term “film noir” in this magazine is from 1971; the first in the New York Times is from 1973.